Goodman Park, named after Irwin and Robert Goodman, was once known as Franklin Field after Benjamin Franklin. Today, the 30 acres of goodman park is a first of its kind here in Madison with the city’s first public pool. It was Robert Goodman in 2009 who said, “Success has many measures, but none so powerful as a hand reaching out to another in gesture of support and human kindness.”

From baseball games in the 1950’s to soccer games in the 1960’s, Goodman Park was a place of great community gatherings. October of 1954, then Franklin Field even hosted an emergency mass feeding demonstration. This event stretched on for two days and educated the community on what to do if the area’s food and water were contaminated by nuclear radiation. 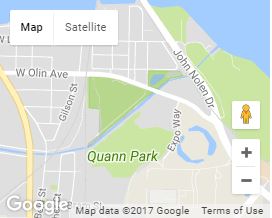 Irwin and Bob Goodman, originally from Minnesota, were brought to Madison for the family jewelry business – Goodman Jewelers. Their father Harry Goodman started the jewelry store after emigrating from Eastern Europe. The brothers then took over the family business making Madison their home.

The Goodman brothers’ philanthropy is seen throughout Madison, including donations to the University of Wisconsin women’s softball team and the creation of a community center. To Irwin and Bob, Madison was much more than a place to conduct business. This community was their family. The brothers dedicated more than 70 years to the city of Madison and continue to give back through the Goodman Foundation. After passing away in 2009 and 2012, Bob and Irwin Goodman’s legacy continues to leave a mark on the city they loved.